The start of February brought with it some very positive news for the future of Western Power.

Energy Minister Ben Wyatt announced a new initiative: the State Government, though Western Power, will be providing 20 pre-apprenticeship electrotechnology scholarships to Western Australians looking to start their careers in the field.

Furthermore, the scholarships will be offered through Southern Regional TAFEs in Albany and Bunbury, creating career opportunities in regional WA and helping to address a critical skills-shortage outside of the metropolitan region.

20 scholarships may not sound like a big number, but it’s important to understand the recent history with apprenticeships at Western Power.

When the Barnett Government decided to move towards privatisating Western Power, it began a vicious round of cutbacks and savings measures to make the company as profitable and attractive to investors as possible.

That meant that after years of consistently hiring more than 50 apprentices each year to build the next generation of skilled workers, Western Power hired only 12 apprentices in 2015. 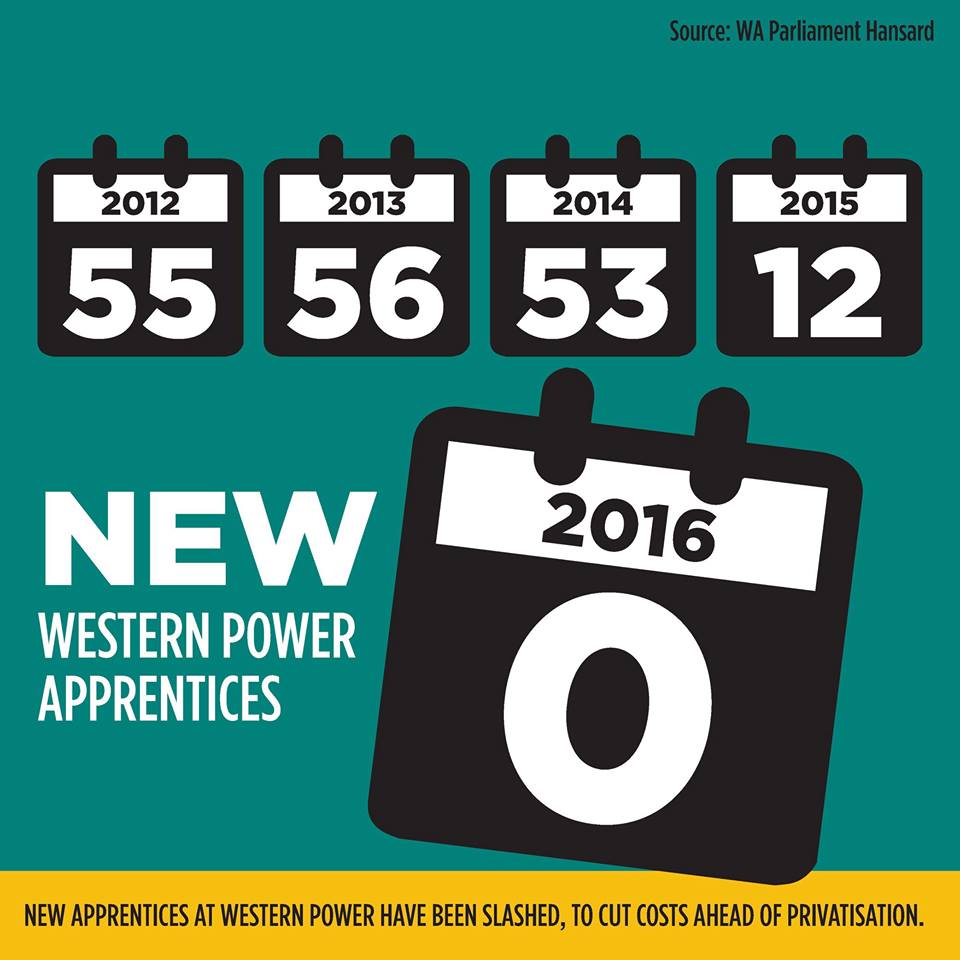 Simultaneous to this hiring halt, Western Power embarked on a campaign of redundancies and job cuts. Between April 2016 and the March 2017 election, more than 500 staff were let go, which meant that in less than a year Western Power had reduced its workforce by almost 20 per cent.

It wasn’t just non-essential office jobs being shed. The number of afterhours faults and repair crews were halved during the purge.

The combined effect of these two policies might have made the bottom line look better to private investors, but they were cause for great alarm for the residents of Western Australia.

In January 2017, we got a taste of how bad things had already become when light rain during a minor cold front saw 35,000 customers lose power. The outages spread as far as Bunbury in the south and all the way up to the Shire of Dandaragan in the north. Some customers were without power for more than three days.

We have over 40 crews responding to outages which are impacting power to the 25,000. Read more: https://t.co/lZkVzHMXLb #perthnews pic.twitter.com/XCPLxk2ZQ6

If light rain in the middle of summer caused so much chaos, what would happen when a major disaster struck?

And that’s just the immediate impact of the cuts. Losing almost a fifth of the workforce in less than a year meant that an enormous amount of institutional knowledge and experience was gone suddenly.

It’s not hard to understand that an organisation losing thousands of hours of experience, while at the same time blocking the path to develop the next generation of skilled employees, is heading for disaster.

It was a major reason why voters emphatically rejected the Barnett Government’s plan to privatise Western Power at the 2017 State Election.

With the McGowan Government’s commitment to returning to the previous benchmark and taking on at least 50 new apprentices each year, Western Power will begin to rebuild its capacity and futureproof a vital WA asset for generations to come.

This scheme is the first step to rebuilding the capacity that was lost during the push for privatisation. It won’t happen overnight, but with a commitment from the State Government replenish the skills and staff needed to keep our state running and to protect us against preventable disasters, the future is looking much brighter for Western Power and for WA.